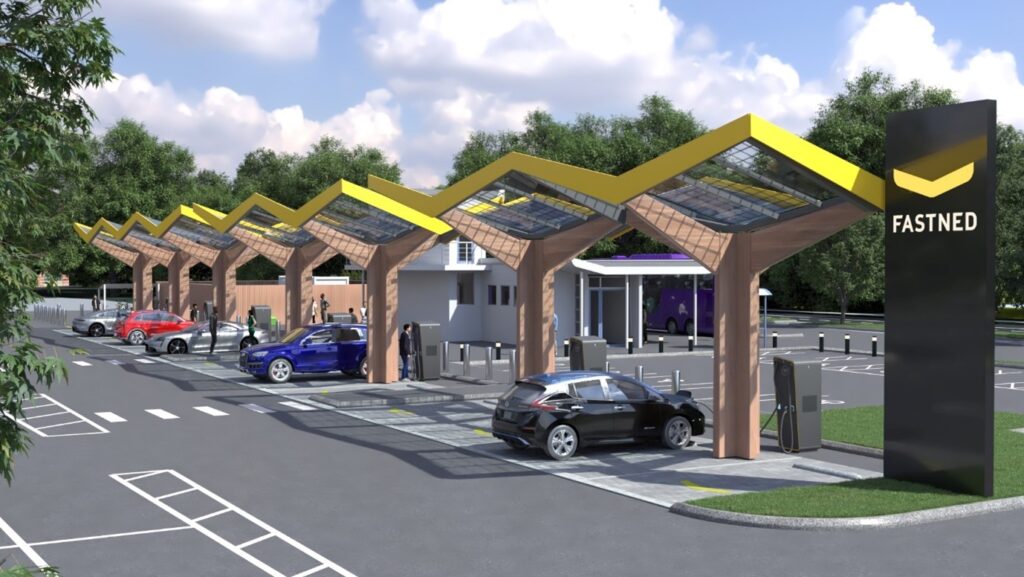 The hub, initially featuring 38 fast and ultra-rapid chargers in a single site, is the most powerful in Europe with up to 10MW of power on site and will scale up to help meet the need for EV charging in the area for the next 30 years. It is the first of up to 40 similar sites planned across the UK to help deliver charging infrastructure needed for the estimated 36 million EVs by 2040.

Unlike any other UK charging hub, the site at Redbridge Park & Ride, is directly connected to the high voltage national electricity grid, to provide the power needed to charge hundreds of EVs at the same time quickly without putting strain on the local electricity network or requiring costly upgrades. This innovative network, developed by Pivot Power, has capacity to expand to key locations throughout Oxford to meet mass EV charging needs from buses and taxis to commercial fleets.

Fastned will initially install ten chargers at the Superhub with 300kW of power, capable of adding 300 miles of range in just 20 minutes for hundreds of EVs per day. The station will be powered by 100% renewable energy, partly generated by the company’s trademark solar roof and all makes and models of EVs will be able to charge at the highest rates possible simultaneously. 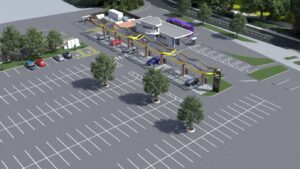 The announcement is a key milestone in the completion of Energy Superhub Oxford (ESO), due to open in Q4 this year. It comes as Oxford is set to launch the UK’s first Zero Emission Zone this August where vehicles are charged based on their emissions with EVs able to use the zone for free.

The £41m world-first project, led by Pivot Power, integrates EV charging, battery storage, low carbon heating and smart energy management technologies to support Oxford to be zero carbon by 2040 or earlier. ESO will save 10,000 tonnes of CO2 every year once opened later in 2021, equivalent to taking over 2,000 cars off the road, increasing to 25,000 tonnes by 2032. It provides a model for cities around the UK and the world to cut carbon and improve air quality.

Matt Allen, CEO at Pivot Power, said: “Our goal is to help the UK accelerate net zero by delivering power where it is needed to support the EV and renewable energy revolution. Oxford is one of 40 sites we are developing across the UK, combining up to 2GW of battery storage with high volume power connections for mass EV charging. Energy Superhub Oxford supports EDF’s plan to become Europe’s leading e-mobility energy company by 2023 and is a blueprint we want to replicate right across the country, working hand in hand with local communities to create cleaner, more sustainable cities where people want to live and work.”

Councillor Tom Hayes, Cabinet Member for Green Transport and Zero Carbon Oxford at Oxford City Council, added: “For Oxford to go zero carbon by 2040, we need to electrify a lot more of our transportation. As an innovative city embracing technologies and change, Oxford is the natural home for the UK’s largest public EV charging hub. We are excited to be taking a major step forward in the completion of Energy Superhub Oxford, working closely and superbly with our private sector partners. As an ambitious city, we are excited about the prospect of further innovation and investments, building upon our record of transformational public and private sector delivery.”

Government plans to cut carbon emissions and improve air quality will see millions of EVs in use by 2030 and the project will show how this can be achieved while maintaining a stable and cost-effective electricity network. To accelerate the delivery of ESO, the Government has contributed £10 million to the project via UKRI’s Prospering from the Energy Revolution programme. 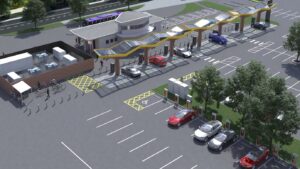 Rob Saunders, Challenge Director, Prospering from the Energy Revolution, UKRI said: “Forward-thinking innovation in the energy space is key not only to change current energy use but to plan for societies and industries that prosper in the future. The combination of benefits this project delivers – from storage and AI-powered flexibility services, to greener heating and vehicle charging – are exactly the kind of multipurpose solution that will help drive the UK forward as a leading net zero innovator. The Energy Superhub is also a great demonstration of what can be achieved with a commitment to collaboration, and bringing together different areas of expertise to tackle key issues for our energy future.”

WORLD-LEADING EUROPEAN EV CHARGING IS EXPANDING IN THE UK

At the ESO Superhub, Fastned is creating one of the largest charging stations in the company’s pan-European network, where up to 14 EVs can charge simultaneously. Fastned currently has over 135 charging stations across the Netherlands, Germany, Belgium, Switzerland and the UK, and recently raised €150 million to accelerate the growth of its network. Fastned has the goal to build a network of 1,000 fast charging stations across Europe by 2025. ESO marks an important step in Fastned’s continued expansion into the UK. 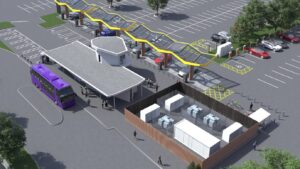 Michiel Langezaal, CEO of Fastned, said: “Our mission is to accelerate the transition towards electric mobility by giving freedom to electric drivers. EV drivers experience this freedom when they know that fast and convenient charging is omnipresent. The Oxford Superhub is a great milestone towards that goal. We need hundreds more and will therefore continue to engage with landowners and partners such as Pivot Power across the UK. Big stations are the only way to provide charging capacity to the exponentially growing number of EVs coming to our roads.”

Gamma Energy Ltd through Wenea, one of the largest EV charging services providers in Europe, will deploy 16 x7-22kW charging points for ESO. Currently in Spain, Wenea owns more than 170 fast and rapid chargers and recently secured a €100M financing line to deliver an additional 470 rapid chargers over the next 2 years. A further twelve 250kW Tesla Superchargers will be available for Tesla owners.

Any EV will be able to use the site, with chargers open 24/7 and only requiring a simple contactless payment. An on-site café is planned where drivers can buy drinks and snacks, ensuring the charging process is as convenient as possible. 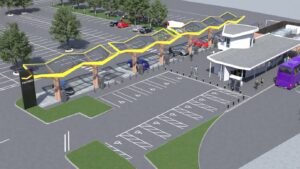 Three quarters of local councils1 in the UK have now declared climate emergencies. However, very few have set out clear plans for how they will rapidly cut carbon emissions. ESO is a model of how public-private sector collaboration can deliver world-leading urban decarbonisation projects.

With Oxford set to introduce the UK’s first Zero Emission Zone in August 2021, ESO will support the city’s aims to reduce toxic air pollution levels, tackle the climate emergency, and improve the health of residents, workers and visitors in Oxford and beyond.

The project will also support Oxford City Council’s ambition to achieve zero carbon emissions across its estate and operations by 2030 or earlier and become a zero-carbon city by 2040 or earlier, ten years ahead of the Government’s 2050 deadline.

The EV Superhub will share a new connection to National Grid’s high voltage transmission network with a 50MW hybrid battery – the largest ever deployed using lithium-ion and vanadium flow technology – to enable more renewable power onto the grid, accelerating the UK’s shift to net zero. In addition, the hybrid battery helps to pay for the infrastructure, trading energy and providing real-time grid balancing services to National Grid.

A map of all our proposed Energy Superhubs can be found at: www.pivot-power.co.uk

Fastned has been developing fast charging infrastructure for electric vehicles across Europe since 2012. Fastned’s mission is to accelerate the transition to sustainable mobility by giving freedom to electric drivers.

Based in Amsterdam, the company has built 137 fast charging stations in the Netherlands, Germany, the United Kingdom, Belgium and Switzerland. Fastned will also build stations in France this year.

The company specialises in developing and operating fast charging infrastructure where drivers can charge their electric vehicle with up to 300 km of range in 15 minutes before continuing their journey.

Fastned has 75+ employees across 6 markets (the Netherlands, Germany, the United Kingdom, Belgium, France and Switzerland) and is listed on Euronext Amsterdam (ticker AMS: FAST).

Energy Superhub Oxford (ESO) is one of three demonstrator projects part-funded by the UK government’s Industrial Strategy Challenge Fund under its “Prospering from the Energy Revolution” (PFER) programme.

Wenea owns more than 170 fast and rapid chargers and recently secured a €100M financing line to deliver an additional 470 rapid chargers over the next 2 years. It is also deploying 150 rapid chargers in Exeter, in what constitutes a world-first project to deliver widespread rapid charging in an urban context. Its solution, combining battery storage technology and supported through an Innovate UK grant solves the problem of rapid EV charging in grid-constrained areas. 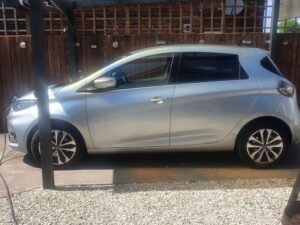 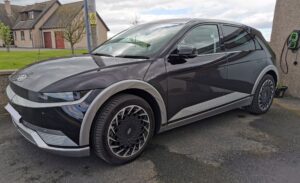 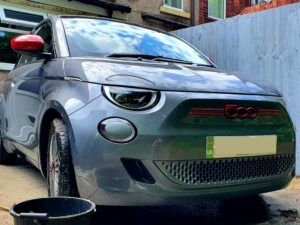 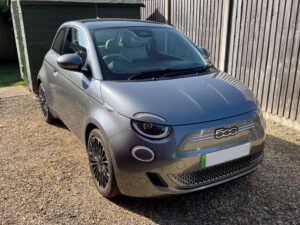