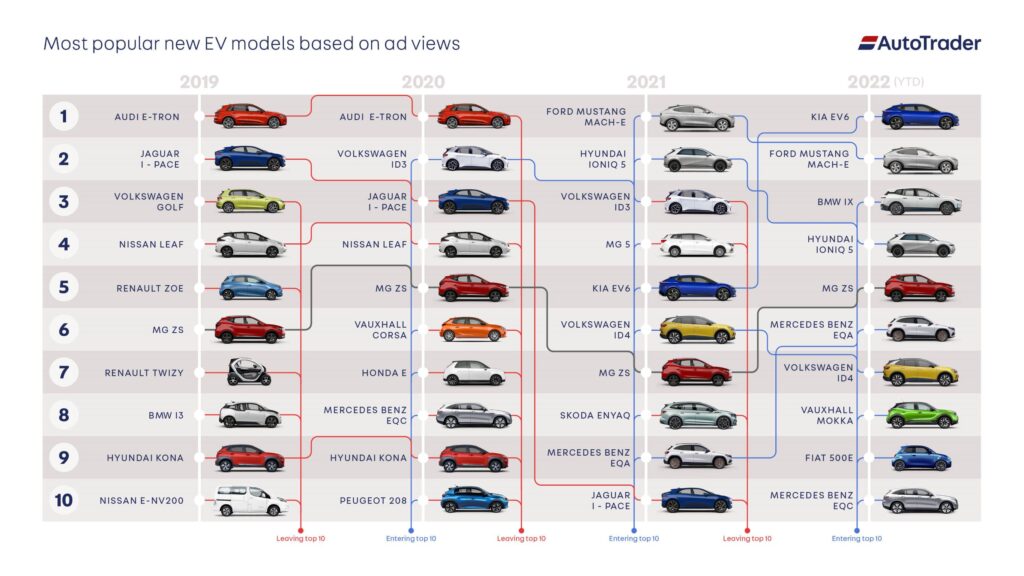 As fuel prices rocket, Auto Trader is seeing a resurgence in consumer demand for electric cars on its platform.

The volume of enquiries for both new and used electric cars has reached record levels over the weekend (12th-13th March). But as the electric revolution gathers pace, the UK’s largest automotive marketplace’s data shows that it is Kia and Hyundai that have been the most successful brands to make the transition to electric, leaving their premium European counterparts lagging in the popularity stakes.

The proportion of electric cars viewed on Auto Trader had dropped from a high of 26% in late September 2021 when the fuel crisis took hold, to just 16% in February. However, since prices at the pumps started to spike, so too has consumer interest, with new electric cars now accounting for more than one in five (22%) of all new advert views, whilst the volume of enquiries sent to retailers through Auto Trader shot up at the weekend, to an all-time high of 30.7%. In just a week, the volume of advert views for new electric cars has increased 30%[1].

Although commanding a similarly premium price tag (the average new electric car costs circa 35% more than a petrol or diesel equivalent), the premium marques are losing out to their volume competitors, making up four of the top five most in demand electric cars on Auto Trader.

Kia is setting the pace with its instantly iconic EV6, which is not only the most popular electric vehicle on the marketplace, appearing in more buyer shortlists[2] than any other brand (and over twice as many as the similarly priced BMW 3 Series), but it is currently the most in demand of any fuel type. Its equally iconic South Korean stablemate, the Hyundai IONIQ 5, is ranked the fourth most popular electric car on Auto Trader.

The findings are captured in the latest Auto Trader Road to 2030 report, which analyses electric vehicle adoption as part of progress towards the government’s 2030 ban on the sale of new petrol and diesel cars.

According to SMMT, one in every eight cars sold so far this year is either a Kia or a Hyundai. But the brands’ new wave of EV models is appealing to wealthier buyers in a contrast to the buyers of their petrol and diesel models and as a result are competing for the same demographic that would typically be drawn to the upmarket European brands.

In terms of price, both Kia and Hyundai’s electric car models are going toe-to-toe with the premium marque’s ICE models, with the average EV6 priced at circa £45,000 on Auto Trader, compared to around £43,000 for the BMW 3 Series. More than half of would-be EV6 buyers, or 53%, earn more than £50,000 compared to just 38% for Kia’s ICE buyers. This contrasts with the Korean firms’ ICE models, which have never commanded the same pricing power as premium brands.

The push into the premium space has been built on rising product quality, bringing recognition for Kia’s Sportage at Auto Trader’s New Car Awards, and smart business planning. Hyundai Motor Group, which is also the parent company of Kia and the fourth largest selling brand in the world, produces many of its own components and sources its own raw materials, helping it maintain supply and insulate it from the shortages hitting many rivals.

Erin Baker, Editorial Director at Auto Trader, said: “Consumers with long-standing brand loyalty to premium European brands are actively turning to a Kia or Hyundai when they seek out an electric vehicle. People who would have previously dismissed these marques are re-evaluating what they want and what they value and the impact on these two brands has been transformative. What they have achieved in this hugely competitive and very fast-moving new sector of the industry, is really quite remarkable. They’ve set a new benchmark in quality, performance, styling, and price, that won’t be easy to reach.”

Auto Trader’s Road to 2030 Report found that the share of advert views of new petrol cars fell 7% over the past year, dropping from 56% of all views to 48% in February. Diesel plummeted from an already low 24%, to just 9%.

Win your dream electric car here with Best of the Best (BOTB)!