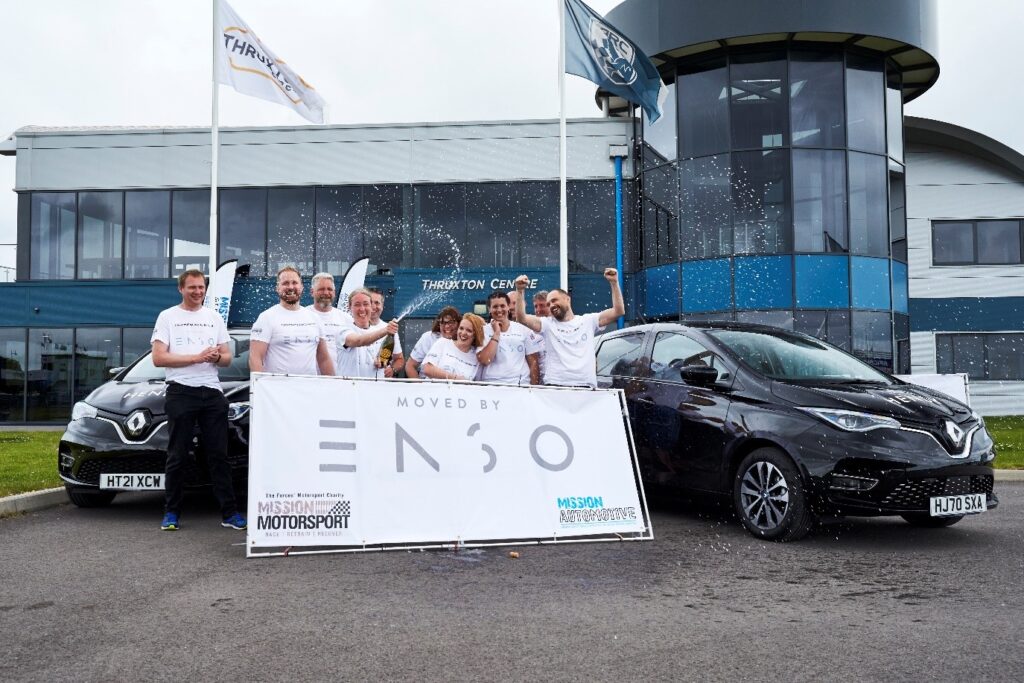 At the UK’s fastest circuit, Thruxton in Hampshire, a Mission Motorsport team of: British veterans, the spouse of a serving soldier and a hypermiling expert, undertook an assault on the existing record for the longest distance driven in a Renault ZOE on a single charge.

Equipped with ENSO’s pioneering range extending EV tyres, Mission Motorsport deployed its considerable endurance racing experience to maximum effect. The 2018 French record of 7.9 miles per kilowatt hour, an incredibly high bar, was surpassed by the British team with 9.14 miles per kilowatt hour, without the benefit of higher ambient temperatures.

Driving day and night, for over 24 hours, at the optimum average speed of 19mph, the Renault ZOE equipped with ENSO’s EV tyres reached a world beating 475.4 miles on a single charge, smashing the French record by 124.4 miles. An identical Renault ZOE, equipped with its standard OEM tyres and driven by the same team, reached 424.7 miles in comparison, well in excess of its official WLTP range of 245 miles.

“ENSO’s mission is to deliver the most efficient, durable and sustainable tyres for EVs. ENSO is driven by delivering innovation in the tyre industry and is already working with leading EV carmakers and fleets. This new world record proves that our ultra-energy efficient EV tyres have a huge role to play in extending electric driving range and addressing range anxiety. By delivering ultra-low energy consumption per mile, our EV tyres not only save cost and electricity but allow us to dramatically extend EV-range, moving the tyre industry truly into the electric age,” Gunnlaugur Erlendsson, ENSO CEO, said.

Where the EV rubber hits the road

To tackle this unique world record, Mission Motorsport teamed up with ENSO to see just how far a Renault ZOE could travel on a single charge. The perfect partner for the mission, ENSO delivered the ideal EV tyre, based on its work to develop sustainable tyres without passing the cost to drivers or the environment.

To deliver the two-pronged attack on the record, the Mission Motorsport team used two different sets of tyres on two identical Renault ZOEs. With its OEM tyres fitted as standard, the first Renault ZOE achieved an impressive 424.7 miles to smash the existing record of 351.0 miles set in 2018.

However, the identical Renault ZOE, fitted with ENSO’s propriety EV tyres, carried on thanks to its unique tyre construction and greater energy-efficiency, to notch up a total of 475.4 miles, i.e., extending the EV range a further 50.7 miles, an increase in EV range of 11.27%. 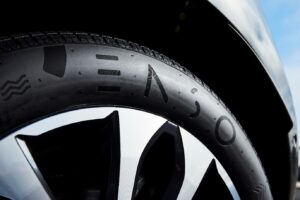 Mission Motorsport aids in the recovery of those who have been affected by military operations by providing opportunities through motorsport and the automotive industry. Launched at Thruxton, in March 2012, the charity has today returned to the fastest circuit in the UK, nine years later to raise the bar for British hypermiling.

“Thruxton was the obvious choice for this record attempt, but despite being the UK’s fastest track, the key to hitting 475.4 miles was finding the optimum speed and smooth consistent driving. Backed by ENSO’s unique EV tyre technology we were certain we could break the record, but what we couldn’t have foreseen was the incredible difference in efficiency, distance and feel with the ENSO tyres,” said James Cameron, Mission Motorsport CEO.

To ensure that the record was an honest endeavour, the pair of identical Renault ZOEs were supplied by the Hendy Group in complete showroom specification, with no special tuning. The factory fitted OEM tyres were also retained on the first vehicle, while ENSO’s EV tyres were fitted to the second vehicle. To make sure that both sets of tyres were fitted, aligned, and set correctly, specialist PROTYRE was on hand to assist both Renault ZOEs eke the most miles from each charge. The previous hypermiling record of 351 miles was set in France in 2018, with a Renault ZOE driving around the Paris Peripherique. 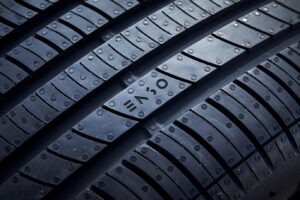 Mission Motorsport brought together a team of veteran beneficiaries, military spouses and a hypermiling expert in a bid to beat the French-set record for distance covered on a full charge in a Renault ZOE.

Tristan Dover, a former solider in The Queen’s Royal Lancashire Regiment, completed seven tours of Northern Ireland.  Having struggled in civilian life, becoming secluded and detached from the outside world, he was diagnosed with Complex PTSD and Depression attributed to his service. Since attending his first Mission Motorsport event, Tristan has flourished. Not only is he working towards a new qualification, but he is also often seen helping out at a variety of events and instructing on the skidpan at Thruxton.

Ian McStein joined the Army in 1999. During his service, he completed a tour of Northern Ireland with The Royal Green Jackets. Whilst on pre-deployment training Ian was called back due to the premature birth of his daughter, an event which led him to leave the Forces.  Upon leaving, Ian struggled with employment and deeply regretted his move into civilian life. Involved in an accident in 2017 in which he broke his lower back, Ian’s mental health issues came to the forefront. Diagnosed with PTSD and a personality disorder, Ian became reclusive and shied away from the world around. Invited to a Mission Motorsport event, Ian is now thriving and is always the first to help and talk to other beneficiaries.

Matt Stringer joined the Army in 2004 and served with The Royal Anglian Regiment (The Vikings). During his service, Matt completed 2 arduous tours of Afghanistan, the first of which saw the regiment endure significant losses including five of Matt’s close friends. It was during his second tour, that Matt, having been involved in an IED explosion which killed two of his comrades and injured his Platoon Commander, was left with permanent hearing loss. Medically discharged in 2013, Matt struggled to come to terms with his new civilian life and lacked a real sense of direction. Engaging with Mission Motorsport, Matt has gone from strength to strength. Setting up his own business built on the passion for vehicle wrapping first discovered in the Mission Motorsport livery suite, ‘Matt’s Wraps’ have made a real name for themselves in the industry. 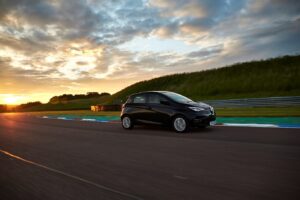 Linda originally joined the Army in 2000 serving with the Royal Gibraltar Regiment before transferring to The Adjutant General Corps (AGC) Staff and Personnel Support Branch (SPS). Having served in Gibraltar, the UK and Germany, Linda also completed a tough tour of Afghanistan. Sadly, in 2018 she was medically discharged when she was diagnosed with complex PTSD, anxiety and depression alongside debilitating rheumatoid arthritis. Her discharge from the Services alongside her medical diagnosis saw Linda hide away from the world and trapped in her own house. Whilst being discharged from the Army, Linda was introduced to Mission Motorsport and invited to participate as a Silverstone Race Maker. Since engaging with the charity, Linda has made incredible steps to overcome her issues and low self-confidence and even participating to great acclaim as part of the Mission Motorsport demonstration team at Autosport in 2020.

Tilly is the spouse of a serving Royal Engineer and newest addition to the Mission Automotive team. Tilly has previously worked for Royal British Legion Industries, the Army Families Federation and accompanied her husband on numerous overseas and UK postings with prolonged periods of separation due to operational deployments. Tilly has a vast experience of service life and the difficulties that military families face. As a Mission Automotive Account Manager, Tilly works closely with companies helping them to engage with the Armed Forces Covenant, promote best practice and harness the skill sets that the military community can bring to employers.

Kevin Booker is an award-winning EV Fleet Manager and passionate hypermiler. A long term EV advocate and award-winning eco-driving competitor, Kevin brings a real depth of knowledge and understanding of the underlying technology and techniques which helps both in his day job managing a fleet of low and zero emission vehicles and in optimising the efficiency and mileage in this challenge. 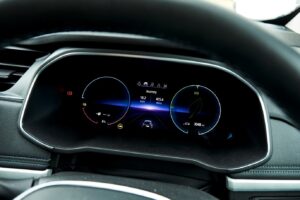 The Forces’ Motorsport Charity, which has a motto of ‘Race, Retrain, Recover’ is the MoD’s competent authority for motor sport as a recovery activity and is a Royal Foundation (the charitable trust of the Duke and Duchess of Cambridge) Endeavour Fund initiative.

A service charity and a member of the Confederation of Service Charities, Mission Motorsport has an award-winning collaborative model of working with government and the other service charities.

Approaching its 10th year of operations, Mission Motorsport has delivered more than 6,000 training days of sport for 2000 wounded, injured or sick beneficiaries, leading to over 400 placements and over 200 jobs. The charity’s veteran employment programs have paved the way for over 2000 veterans into employment in the automotive industry.

ENSO is disrupting the tyre industry, by developing energy-efficient, durable and sustainable tyres for EVs.

Tyres are the next great environmental scandal that no one is talking about. Tyres are responsible for more PM air pollution in the UK than all tailpipes (PM2.5 & PM10, DEFRA), over a quarter of all primary micro plastic pollution in our oceans (28%, IUCN), and billions of tyres are wasted and burned annually, accelerating climate change.

Electric vehicles (EVs) are our future and ENSO loves EVs as they help us address climate change. However, like all vehicles, EVs still generate tyre pollution and often emit even more of it, because of their greater weight and torque. So unless we address increased tyre pollution from EVs, the problem will simply go from bad to worse.

This is why ENSO is developing better tyres for EVs, to help reduce air and ocean pollution, help stop climate change in line with the UK Government’s Net-Zero Strategy and accelerate the adoption of EVs and cleaner forms of mobility. ENSO’s mission is to deliver the most efficient, durable and sustainable tyres for EVs, with its latest energy-efficient tyres having already achieved an ‘A’ energy-efficiency rating by TÜV SÜD in Germany.

ENSO will be launching commercially this year in London, before rolling out across Europe and North America via an innovative direct-to-customer ‘pay-per-mile’ model, offering EV customers better tyres at an affordable price. This has been designed to disrupt legacy distribution to serve EV-carmakers, fleets and private individuals directly; shifting financial incentives away from shorter-life highly polluting tyres, towards energy-efficient, affordable, durable & low-emission tyres.

ENSO is proud to announce alongside the world hypermile record that it has secured funding from the UK Future Fund and HNW investors, ahead of its commercial launch this year in the United Kingdom, Europe and North America. ENSO is now inviting its wider community of EV lovers to join this funding round that launches today on Crowdcube – www.Crowdcube.com/ENSO