Liz & her love for Renault Zoe(s) – Living with an EV 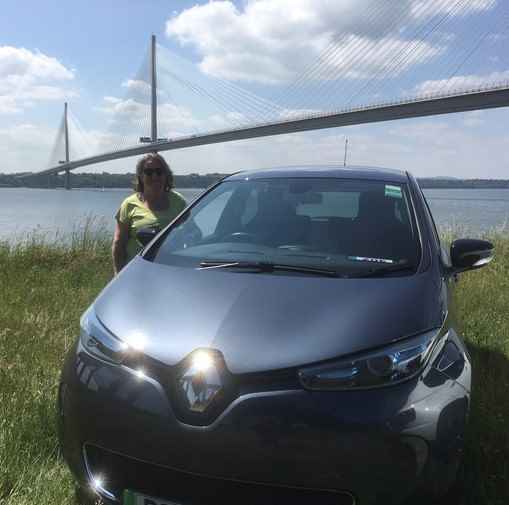 In 2015, my husband who was retired decided after much research to blow some of his savings and purchase a Tesla model S. By early 2016 the car was here and he loved it! I had a Skoda Citigo automatic at the time that I used for commuting and shopping. After seeing an advert for a Renault Zoe at a hard-to-believe price on a PCP we went to investigate further. I had no idea about electric cars apart from what my husband had told me and what I’d learnt from driving the Tesla but I was keen to drive a car with more power and also be emission-free.

Luckily the salesman at the Renault dealership who came to help us was an expert on electric vehicles and so could answer all our questions and I signed-up to take delivery of a Renault Zoe 22kWh on 1st September 2016. I’m sure I wouldn’t have thought about getting an electric car if it wasn’t for my husband owning a Tesla, it allowed me to see close at hand what an EV was all about. I would never have chosen a Renault pre-EV cars as I had always driven cars with German engineering (VW Polo, Mercedes A-Class and Skoda) so knew nothing about Renault.

The best thing was the fitting of a home charger that Renault organised and paid for as part of the deal. I was allowed to test drive a Renault Zoe in my local area, which is quite hilly and I loved the acceleration, it was also great when driving in town being able to nip out at roundabouts and junctions and later being able to accelerate faster than Audi and BMW drivers at dual carriageway junctions! The fact that I bought the car was because of the expert knowledge of the salesman and the great deal from Renault that meant it would cost me less to pay for a PCP than it was costing me in petrol on my Citigo!

It was fun learning to use the home charger and then trying out public charging. In Scotland an RFID card allowed use of most of the public chargers and the electricity was free. I usually plugged in Zoe when I got home and it was 100% full by the morning and ready to go again but also used a free charger at the local Park & Ride and took the bus into Edinburgh. 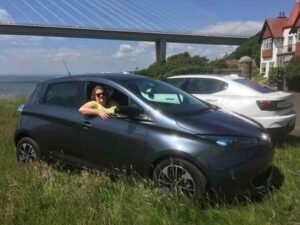 I ventured further afield meeting friends and we chose places to meet where there was a charger so as we chatted the Zoe filled up with free electricity ready for the journey home. The Zoe only had about 85 miles range which dropped to 60 in cold, wet weather in winter months so going further than 25 miles from home needed careful planning via chargers with plan A, B and C just in case chargers were occupied or not working. I soon learned that driving on A roads didn’t use as much electricity as motorway driving and usually only added a few minutes to a journey. This is also true driving at 60mph on a motorway but that’s quite hard to do.

The hardest thing I did was a lone drive up to Aberdeen 120 miles away. The drive route and charging points were planned and the charger locations were added to the sat nav along with a couple of extras in case a charger wasn’t working or busy. I managed the journey but it was very stressful mainly due to the scarcity of chargers at that time and the fact that the postcode location often took you to the right vicinity but as I didn’t know the area I was having to ask people if they knew where the charger was and most people had no idea. After that trip I only used Zoe locally and relied on the Tesla for long journeys.

The next trip to Aberdeen I drove the Tesla and because of the Supercharger network it was no problem. We made lots of long trips in the Tesla travelling all over UK and Europe including a drive to Naples. The supercharger network across Europe made this easy. On one occasion when I needed to make a long journey to attend a funeral and my husband was away from home I just hired a Fiesta for 3 days and it cost me about £50.

Friends and neighbours had lots of questions, as did strangers when they saw you plugging into a public charger. The most frequently asked question was, ‘How long does it take to charge?’ and my answer was always “I don’t know as it’s just like having a mobile phone, I plug into my free home charger when the battery is getting low and the next day it’s at 100%.” If I was at a public charger I just said I charge for as long as my shopping or lunch takes; a bit like popping into a petrol station and putting in £5 or £10 worth of petrol. Everyone was amazed my home charger was fitted free and that public chargers’ electricity was free too (not the case now.) Being a two electric car household sparked many peoples’ interest and we took a lot of friends and neighbours out for drives and have converted a few to electric car driving.

I joined RZOC (Renault Zoe Owners Club) on Facebook when I got the Zoe and reading everyone’s posts answered any questions I had and when I had a problem I could post on RZOC and get a reply almost immediately. Now I would urge anyone thinking of buying a Zoe to join RZOC, or a similar group depending which car you’re thinking of and ask all the questions before buying!  Also, I had a lot of support from the salesman from whom I bought the car; he was always happy to help when I had a question. 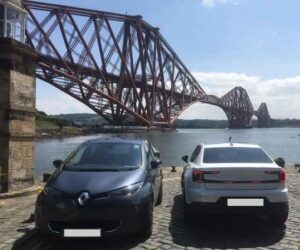 I absolutely loved my first Renault Zoe, just the right size for me (5 adults fitted in easily for short trips) and I really liked driving emission-free but with lots of acceleration. As Renault only sold Zoes with a battery rental in 2016 I had been fully covered for any problems (even punctures) and even paying that each month, my running costs were much less than they had been with the Skoda. I only ever had a couple of problems; my home charger kept cutting out before the charge was complete and on another occasion I was away from home locally and couldn’t start the car. Each time Renault customer service call a flatbed to pick up the car and take it to the nearest dealer to be fixed. The Renault garage fixed them under warranty with no problem, there really is very little to go wrong on an electric car so maintaining it is cheap and easy.

I replaced the tyres and windscreen wiper blades and that was it. The only other things to keep an eye on is the brakes but they don’t wear down as you learn to use the regeneration braking rather than the pedal and the 12v battery is just like any car.  She was nearly 5 years old before I decided to change her for a newer car. My husband had sold his Tesla and now has a Polestar. I decided on a second-hand Zoe 43kWh which gives me double the range without all the new driving technology which comes as standard in new cars including the Zoe 50kWh. I just felt lots of the driver assist options, music systems and internet connectivity were not for me. My husband has them in spades on his Polestar.

Having decided on the car I wanted I bought it remotely from an RZOC recommended dealer, we made the deal over the phone, I viewed the car on video and my Zoe was taken in part-exchange when the new car was delivered to my door. I might have chosen a different car as there are so many new ones to choose from these days but as we were in lockdown it was impossible to visit car showrooms. Besides, second-hand Zoes are so affordable and as I’m now fully retired that was a factor. My new car was 18 months old and still has a battery rental agreement as I like the backup that gives me. 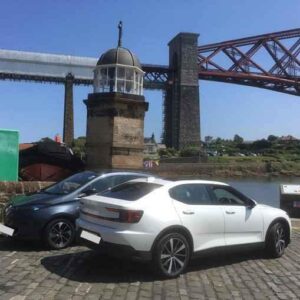 I can’t imagine why anyone wouldn’t want a 22kWh or 43kwh Zoe as a second car or even as a main car if you only make local journeys and have space for a home charger to be fitted. I see lots of older ladies struggling to drive manual cars; all electric cars are ‘automatic’ so why would you choose a Clio or a Fiesta? I love being emission-free and having no car tax to pay and paying so little to fill up. We now have an electricity supplier that only uses renewable energy and we set our cars to charge at a cheap rate during the night.

As you can tell, I love being an electric car driver!