Turntide Technologies, today announced the launch of Turntide Transport, a new division of the company focused on modernizing intelligent motor systems throughout the commercial transportation industry.

Turntide is entering the transport space with the acquisition of two UK-based companies: Hyperdrive Innovation Ltd., and BorgWarner Gateshead, the electric drivetrain division of BorgWarner. Turntide Transport will establish operations in Gateshead, England, marking the beginning of a multi-year £100 million investment in the region. Financial terms of the deals were not disclosed.

Despite initiatives to drive down the burning of fossil fuels, our global carbon footprint continues to expand. The transportation industry accounts for 24% of global CO2 emissions from direct fuel consumption. As more fossil fuel-powered passenger cars are replaced by electric vehicles, the carbon footprint of freight transportation, which includes all shipping services by land (railways, trucks, and pipelines), sea (cargo vessels), and air (cargo planes), only continues to grow. Between 2010 and 2050, global CO2 emissions from freight transport are expected to increase fourfold.

By combining the Smart Motor System with acquired electric vehicle technology, Turntide is joining the effort to help solve our global transportation problem, improving efficiency and driving down energy use and waste.  The Turntide Transport division will initially target electromechanical systems in some of the more challenging markets to decarbonize, including commercial and industrial vehicles, rail, marine and aerospace. 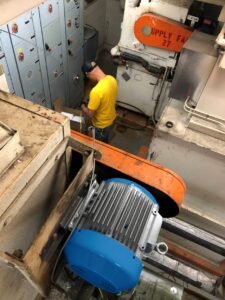 “Our world is at a tipping point. We desperately need to reduce our carbon emissions, but they continue to rise despite the accelerating electrification of passenger vehicles,” said Ryan Morris, Turntide’s Chairman and CEO. “Because Turntide has been successful in driving down energy use and waste in the built environment, it is critical that we translate this success into transportation to help combat the growing threat of climate change. We are excited to incorporate the experience and innovation that these two companies have to offer as we launch into the transport market with our initial reference customers.”

Turntide’s ‘Platform for Sustainable Operations’ brings together the Smart Motor System with automation and cloud insights to dramatically improve the efficiency of building control, electric vehicles, and industrial processes, boosting bottom lines and smoothing the global path to 100 percent renewable energy. Until now, Turntide has achieved this within the built environment, primarily retrofitting the electric motors in HVAC and agriculture with intelligent, optimal efficiency systems.

The acquisition of Hyperdrive Innovation, one of the UK’s leading independent battery pack manufacturer, will allow Turntide to include energy storage in its solutions. Hyperdrive designs, develops and manufactures modular high-performance lithium-ion battery systems for a wide range of applications.

Also, a part of the acquisition is BorgWarner Gateshead Technical Center, a company that has been designing power electronics for a wide range of vehicles for over five decades, focusing on motor controllers and other devices that determine the motion of electric vehicles.

By integrating technology from both entities, Turntide Transport will be a one-stop powertrain platform provider, including the battery pack, power electronics, motor and connected intelligence, accelerating customers’ time to market in the inevitable electric future.

“The electrification of transport is inevitable, but it isn’t coming quickly enough. With success in the built environment under our belt, incorporating the technology from these two companies with the Smart Motor System will allow Turntide to simplify the path to sustainable transport,” said Matt Boyle, OBE, Managing Director of Turntide Transport. “Gateshead has become well-known worldwide as a growing center for digital business. We are excited to make Gateshead a center for our innovation in sustainable transport, a move that reflects our confidence in the city.”

Business and Energy Secretary Rt. Hon. Kwasi Kwarteng MP said: “Cutting carbon emissions in transport is key to tackling climate change and I welcome this game-changing investment by Turntide. It will drive forward the technologies we need to clean-up the cars and vans on our roads, boats on our seas and planes in the sky.

“This is also a huge boost for workers in the North-East and further evidence of how our climate change commitments are opening opportunities for economic growth, private investment and job creation across the UK as we level up and build back greener from the pandemic.”

Turntide’s mission is to make every watt of energy worthwhile to humanity. Notable investors in the company include Bill Gate’s Breakthrough Energy Ventures, Robert Downey Jr.’s FootPrint Coalition Ventures and the Amazon Climate Pledge Fund. Learn more about Turntide Technologies and its Platform for Sustainable Operations at turntide.com.

Founded in 2012, Hyperdrive Innovation designs and manufactures high-performance energy storage systems for powering off-highway and material-handling vehicles as well as stationary and portable energy storage systems. Customers include JCB, Hitachi Rail, Cargotec, and the world’s largest online grocery retailer. Hyperdrive is highly recognized for its growth and innovation with rankings in the Sunday Times Tech Track 100 and the FT 1000: Europe’s Fastest Growing Companies and awards including the Queen’s Award for Enterprise: Innovation and Insider Media’s Made, the UK Automotive Award, and shortlisted for Innovation of the Year at the National Technology Awards. For more on Hyperdrive Innovation, visit hyperdriveinnovation.com.